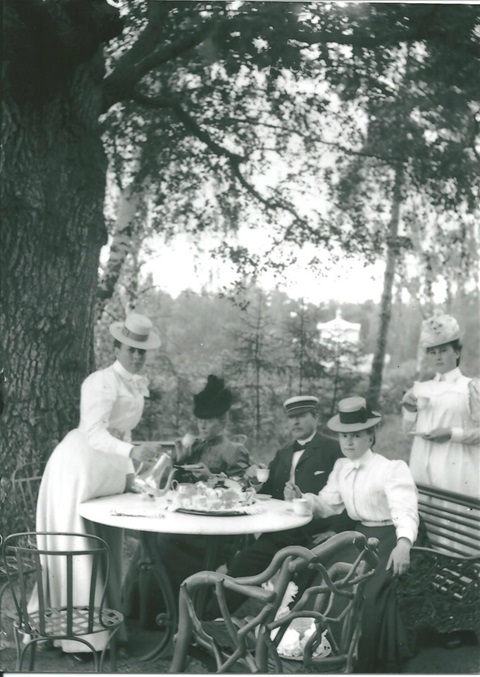 Ruissalo is by its nature and cultural history a valuable and varied part of Finland. It is characterised by old fields, gardens, villas from the 1800´s, oak forests and  a unique flora.

During the Swedish reign Ruissalo was a royal hunting ground. In 1845 when Finland had become part of Russia the Russian Senate gave Ruissalo  to the people of Turku.

It became fashionable to have houses out of the city and a period of villa building began which lasted until the end of the 19th century.  The villas were owned by local dignitaries including the families of

Villa Gustafsberg was designed by Hugo Neuman. and built in 1884. The design was unique as construction used planking rather than log section which gave a lighter feel to the building. It has verandas and extensive use of fretwork decoration.

The villa is situated by the water on a beautiful southern bank which in the spring is covered in flowers. Though most of the original furnishings of the villa have not survived the structure of the building remains intact.

The coloured glass in the windows, hand-painted wallpaper, wooden fretwork and old photographs create an atmosphere, where one can sense life of  the late 19th century.

He had no children and when he died in 1910 he left most of his estate in todays money of 5 million euros to  Turku. His wish was that this money should be spent on providing culture to the people of Turku. Unfortunately due to the war and mismanagement by the trustees most of the money was lost.

The villa in Ruissalo was very dear to Petrelius. He lived there for most of the summer. Although the first bridge was built as early as the1850`s,  most people travelled to Ruissalo by boat.

Every morning Petrelius would wait on his jetty for the morning boat. He had his own place on  the top deck. At the end of  the working day he returned in similar fashion.

In Ruissalo he followed his favourite hobby which was fishing. He caught  pike and  perch.

Villa Petrelius was the venue for many parties. An essential feature of these parties was fireworks which Petrelius personally lit.

Some of the parties were particularly festive including one on the 11th of August 1900, which celebrated Petrelius 50 years living in Turku. All the dignitaries of Turku were invited and the occasion  was reported in the Åbo Tidning.

“After the steak was served the host raised his champagne and gave a toast expressing his thanks that  after arriving in Turku as a fourteen year old boy he had  met  nothing  but kindness and respect in his chosen profession". He announced the he would be giving  a donations to old peoples homes in Turku and Pori  and the workers of the John Barker cotton mill

Gustaf Petrelius` father was a goldsmith in Pori. The family could not afford to provide him with further education, so he moved to Turku when he was fourteen and became a shop assistant.

So started his career as a successful businessman. Petrelius became one of the wealthiest and most influential individuals in Turku.

During his lifetime Petrelius  gave donations to numerous charities including the creation and development of open spaces and parks for the people of Turku.

Art was close to his heart and he was a patron of many talented artists including Edvin Lyden.

He had no children and when he died in 1910 he left most of his estate in todays money of 5 million euros to  Turku. His wish was that this money should be spent on providing culture to the people of Turku. Unfortunately due to the war and mismanagement by the trustees most of the money was lost.